End of this Blog

Tomorrow I will drive to JFK to pick up Marianne. There will be a new blog of our trip to the Canadian Maritimes on

Problems with the Fridge

Wednesday morning, I realized, that the fridge was not as cool as usually. The sites in this National Park are all slanted pretty much either towards the back (on one side of the hill) or towards the front (on the other side). Last night I had decided to take one of the forward tilted ones, since they are still comfortable to sleep. As it turned out, I slept well, but the fridge did not like to be tilted for almost 24 hours and almost gave up on me. I therefore decided to head on and have a chance to get it fixed if I need to.

So, I filled up with diesel and headed north east. The first part of the route was on excellent 4 lane roads across Virginia. Closer to Washington/DC the traffic got heavier and the roads worse. On the interstate around Washington and to Baltimore, traffic was really heavy and there was one construction site after the other. (A lot of signs said that the government gets work to the people and pay with the funds from the Recovery Act).

From Virginia through Washington/DC, Maryland and Delaware I finally arrived in New Jersey, where I found one of the few RV parks in New Jersey near Clarksboro. The fridge was only at 60F instead of 40F when I arrived, but there was still hope, that it got better over night and back on AC power. 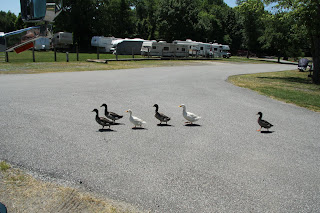 I decided to stay for two nights and fix this problem, since Marianne will arrive this Saturday and it would be nice if the fridge would work again. I checked my manuals, but found not too much information, but Google is my friend and I found a lot of very helpful information in RV blogs and user-groups online. I even found a complete technical descriptions how these absorber fridges work and how bad it is for them to be in a tilted position for longer periods of times. I even found a complete 50 page service manual for my Norcold 1210. I went through all the testing circles described in the manual but everything seem to work normally, it just did not cool enough. In several places online it was suggested to lay the fridge on the site for a couple of hours to eliminate air bubbles in the system. But this is very difficult with a fridge built in. And there is no way to remove it. 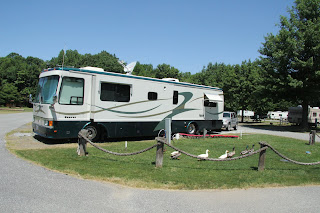 I also called three different RV shops, but they all offered some suggestions but had no time to look at it on short notice. My only hope therefore was, that it will recover over time. I put the fridge on MAX and left Friday morning for Freehold, my last stop on this trip. When traffic allowed, I shaked Genty as much as I could and kept hoping.

At Pine Cone Resort I had a water/electric site only, but after switching to a second site, at least the satellite was working and I could go online and make phonealls on Skype. After a couple of hours on AC again, I saw some improvements and towards the evening, my fridge was working properly again, showing a temp of 40F. What a relieve.


Tomorrow I will drive to JFK to pick up Marianne. There will be a new blog of our trip to the Canadian Maritimes on

From Fancy Gap I took the Interstates for a 150 miles to speed up the process. Driving on the Blue Ridge Parkway is nice, but kind of remains the same and the lookouts are similar from one to another too. The weather was not so nice, so why not take the easy route. En route I got involved in a major traffic jam, where we stood pat for about 90 minutes. 21 state police cars and three ambulances went by and then it turned out that the accident was not even on the interstate but on the exit road.

After overnighting at Walmart in Waynesboro, I spent Tuesday in the Shenandoah National Park, where I found an overnight spot in the Loft Mountain Campground. The park itself is not much different than the Blue Ridge Parkway. Nice road over the mountains with big forests and lookouts left and right, but much of the same again. In the Shenandoah NP there I saw a few animals, including a deer which crossed right in front of me in the campground. In the afternoon I made an excursion with the Jeep and on the way back I collected some wood for a nice campfire in the evening.

On one of the outlooks I met a couple from Michigan who are hiking the Park in its entire length (107 miles) on the Apalachian Trail, which crosses the drive several times. Quite a hike !


Here are a few photos of the park.