A week ago at the Farmers Market in Abbeville I met Betsi Doherty. She is originally from Stetten, Switzerland only 2.4 miles away from my hometown Fislisbach. She invited me for a visit and this visit took place today at their home. Betsi, Paul and her three sons live in a beautiful 4100 ft home on a full acre lot. Paul's parents live next door and they were also there for lunch. 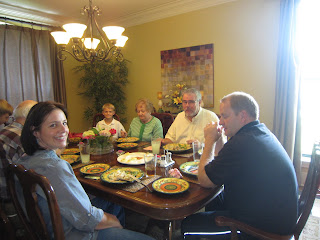 Betsi made a nice "Swiss lunch" and for dessert a typical "Aargauer Rüeblitorte" - wonderful. After lunch we sat in the living room and chatted for a long time until Paul and the boys went out for a ballgame and I went back to the RV Park after Betsi showed me the house, where the three boys have the entire upper floor with bedroom each and a large school-room where they home-school during the week. I enjoyed this afternoon a lot.

Back at Bety's RV Park, Char and John, who are the only visitors still left were still having Happy Hour. We had a couple of drinks together before we went back to our RVs. It was already dark, when three firetrucks came by and stopped right outside of the RV park. It appeared that somebody had passed out at the trailer park on the other side of the road.

Some photos of the lunch are here.