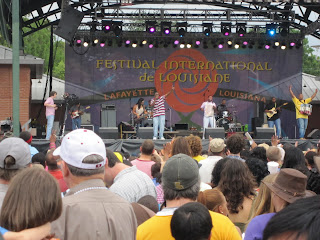 The Festival International de Luisiane in Lafayette celebrates its 25th year and takes place from April 27th to May 1st. Today it was time to check this out. Since nobody else from Betty's RV Park wanted to go, I went all by myself, which was good, so I could do and not do, what I wanted. 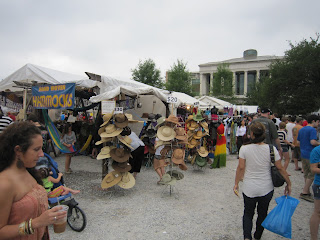 There are Music shows on various stages and a huge "Marché des Arts" (Arts market) and "Marché du monde" (World Market). While the pieces of art were nice, some even real nice and classy, looked the "World Market" more like any market. There was stuff offered from all over the country and many merchants tried to sell crap from Africa. The same crab you can see in any market wherever you go worldwide. There must be a big guy be behind all this and finance. They all have the same products (cheap African art for a relative high price - a ripoff for sure). The new gag they offer now is original African "shea butter". Nobody knows what this "butter" is for and it looks disgusting. 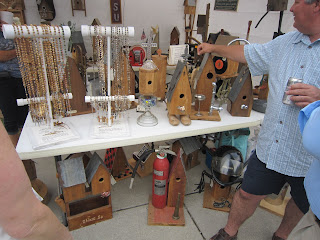 About hundred of stands were selling all kinds of food, mostly Louisiane kitchen. I tested "Alligator sausage with fries", crab cake with seafood etouffée and "Funnel cake" . I liked all three. I also bought 20 tickets for beverages. They are the only way to buy beverages at the festival (worth 50cents/piece).

I also listened to various music performances like "Keith Frank & de Soileau Zydeco Band" "The Duhks" and of course "MarchFourth Marching Band" from Portland, OR (for Swiss readers: a Super Guggemusig). Here is a sample video from their website. 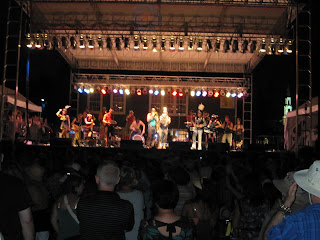 All together I spent 6 hours at the festival. For the MarchFourth Marching Bank concert, which I enjoyed in full length, I even got my folding chair from the car (which was parked in a city street just five minutes from the festival area. It was a nice day around 76F until the end. It was cloudy and looked like rain all the time, but there were only a few sprinkles at one time.

Some photos from the festival are here.