Today was a busy day. I went to a dentist for a little bite correction on one of my new crowns, then I had a haircut. On the way back to the Genty, Rocky called and asked whether I had fruit salad - I made some yesterday, so I invited him to come and get some. He likes my fruit salad. Then he invited me to go to look after his crab cages at 4pm. 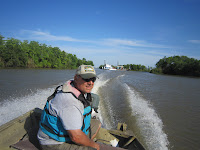 In the meantime I went to Lafayette to have the oil changed in the Jeep. Then to Poches in Breaux Bridge, where I stayed two years ago. They have a restaurant and a store with various Cajun specialities. I bought crawfish tails, sausages and some meet. I stored all that in the freezer to make some Cajun food in the next few weeks. 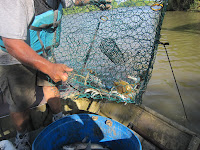 I made it back just shortly before 4pm when Rocky came by. This time he had an even smaller boat, since the bigger one had a technical problem. We then went to the Inter coastal waterway, but used a different boat ramp than last time. First we checked some of the lines for Catfish. The very first one got lost because Rocky forgot to bring the net. Then we picked up two nice ones on another line. On the third line he had caught a huge one (probably over 30 pounds), but when he pulled it out of the water, the weight of the fish straightened the hook and we lost it. Rocky blamed the cheap hook. If he had a net, I could have helped him to get the sucker in the boat. Never mind. 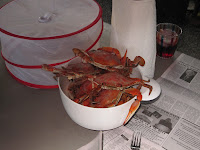 Then we checked three crab cages. They were all stuffed with fish heads for bait and there were about a dozen small and medium size Blue crabs in each cage. There was still enough bait in them, so we did not need to reload the cages. After 1 1/2 hours we were back at Betty's RV park. Rocky gave me a dozen of the crabs for dinner. After he left, Becky brought a big pot, some potatoes, sausages and crab boil powder. I tried first to heat up the water on the barbecue, but that did not work, so I moved the pot inside Genty were I cooked dinner. Betty and I had then a very nice dinner in the patio. The crabs and sausages were wonderful. I even have some leftovers for tomorrow's breakfast.

There are some more photos here.