First thing this morning I went to Ft. Stockton to get Diesel, although there was a diesel pump at the RV Park, but they charged $4.14 - too much for Texas. I planned to go to the first pump for less than $4 and with easy access. Off the highway, I did not have to look long. They all had the same price $3.99 (!). After filling up, I did the long overdue air pressure check on all tires and then - surprise surprise - one of the rear tires had only 25 psi, where 120 would  have been OK. Something must have gone wrong. I tried to pump it up, but I could not get more than 90 psi out of this compressor. There were two possibilities, either I had lost the air on a recent leak and could not pump it up because it was still leaking a lot, or the air went out slowly over time and I did not check often enough (which would be the better case -still).
This I-10 exit is a real truck stop and luckily also had a truck tire shop. I went there and the mech pumped all tires up and the air held. He did not even charge for that. I gave him a Swiss army pocket knife and he was happy and so was I. (I checked again tonight after another 150 miles and the pressure is still good - lucky me). 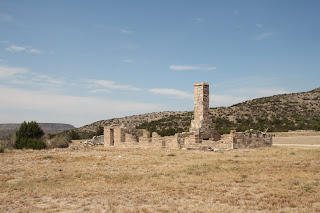 At the exit for Sheffield I saw a sign for "Fort Lancaster Historical Site". I thought - why not and took that short 24 mile detour. There was a small Visitors Center, a large field with a few rock ruins and a small museum. Not really worth it, but it was a nice walk in the heat (low 90s) and I was the only visitor.

Back on I-10 I continued to one of the many Rest Areas. In Texas, RVs and trucks are allowed to stay overnight (parking, not camping - got the difference ? No slid outs, no chairs and barbecues etc. The guys in the Fiver right behind me do just that, but they probably don't know better, they are from British Columbia. 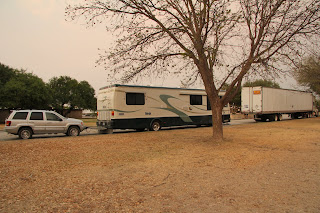 It is still 85 (after sunset) and I might enjoy a warm night.

There are a few pictures from the fort and the sunset at the "park" so see here.