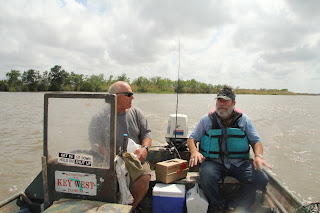 At noon Dale and I left with his truck to Rocky Rousos home in Abbeville to pick up Rocky and his trailer and boat. We went south to the Intracoastal Waterway where we used the public boat ramp to water his boat. It was very windy and the water was a little rough. We went about a couple of miles on the Intracoastal Waterway. In a tranquil area with some sort of reed Rocky fished for some bait. After he got a dozen smaller and larger fish, we went back to the Waterway to go check his lines he baited the day before. 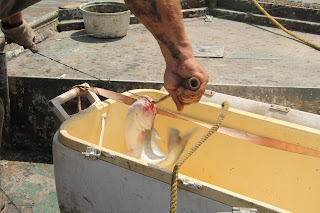 These lines are fix installations of a thick line with hooks every 25 feet. Rocky stopped the boat and manually went from hook to hook. From the first hooks, the bait was taken by the crabs. The first three catfish he ad on the hooks were saltwater catfish. They are not good to eat, so Rocky released them immediately back in the water. Then he had some larger catfish on the hooks. On the four lines he still has out there, we collected 6 nice catfish of over 30 pounds. The will produce about 15 pounds of fillets.

The catfish went in the cooler and Rocky showed us some other areas including some camps and an oil rig drilling for natural gas. 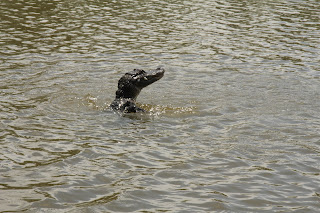 On the way home, we bought some ice to keep the catfish cool for the next day. Rocky will fillet them tomorrow.

After four hours we were back at Betty's RV Park, just in time for the Happy Hour, where we could show a couple of pictures. All together an interesting day - Thank you Rocky.

Photos from the fishing trip can be found here: