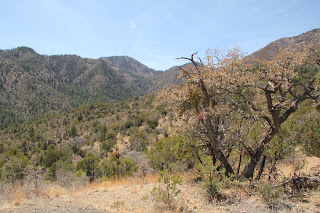 I started this trip late morning. The first part was on a local, but paved road to Portal, AZ. Since the road I wanted to take was closed due to construction, I took the Foothills dirt road to the north, then turned to a smaller dirt road towards Paradise, then a rough mountain dirt road over the mountains. At Onion Saddle at 7800 ft I reached the High point of the day. The same dirt road continued on the other side of the mountain downhill to the Chiracuha National Monument. The roads in the park are paved.

The dirt roads from Portal all the way over the mountains were in pretty good condition and did not even request 4x4. A high clearance though was necessary for the washes and the steep grades, where rain usually damages the road. The road was winding and in some places narrow, but never a problem. Most of this trip was in the Coronado National Forest (no private land after Paradise) which covers most of the public land in the southeast of Arizona. 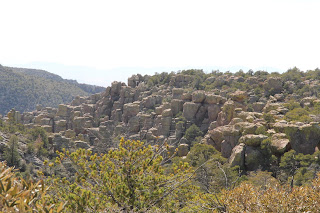 The visitors center in the Chiracuha National Monument is very small and there were only a few visitors in the park. Mostly smaller RVs and cars with RVers (you could tell because most of them had towing equipment mounted). This park is way of the beaten track. The nice paved road goes all the way to the view points at Sugarloaf, Echo Canyon and Massai Point (6870 ft). The park is also called the "Land of Standing Up Rocks" because of the rock pinnacles which can be seen everywhere. More information about the park is here. 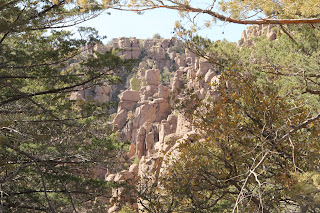 While the drive to here was 2.5 hours, I took the direct route back to Onion Saddle, but then straight down to the paved road leading to Portal and back to Rodeo. (80 min). On the way back I even saw a couple of deer grazing on the wrong side of the road. 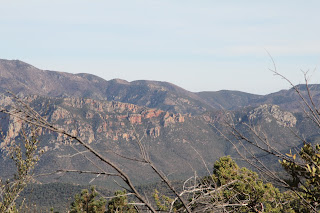 A bunch of photos can be seen here.